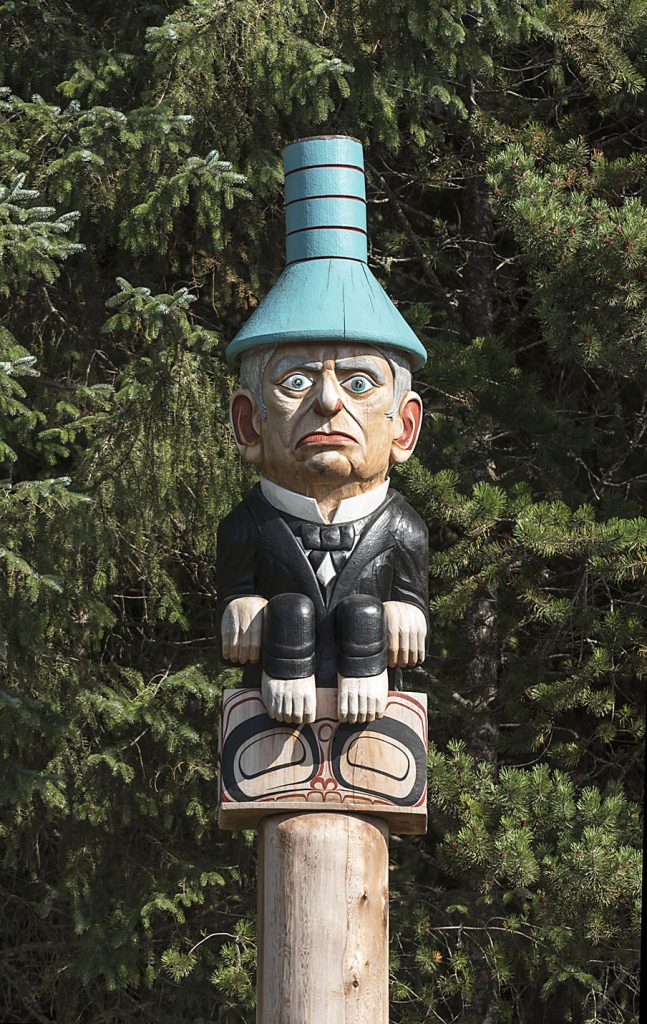 Close up of top of Seward’s Pole in Saxman, Alaska. The pole was carved by Stephen Jackson. Photo by Hall Anderson, used with permission.

In April 2017, a small crowd gathered in the totem park at Saxman, Alaska to dedicate a new version of a Tlingit totem pole known as the “Seward Pole.” The new pole, carved by Tlingit artist Stephen Jackson, replaced an older, deteriorated version, which was itself a replica of a nineteenth-century pole from Tongass Village. The original pole at Tongass was a shame pole, erected in the 1880s to ridicule Secretary of State William H. Seward for failing to repay the gifts he had received from Chief Ebbits, clan leader of the Taant’a kwáan Teikweidí and one of the most high-ranking men at Tongass Village. According to oral histories among the Taant’a kwáan Tlingit, Seward stopped at Tongass Village on a trip to Alaska in 1869 and was welcomed by Chief Ebbits with all the gravitas and gifts befitting a fellow high-ranking leader. But after several years went by and Seward “did not repay either the courtesy or the generosity of his hosts, the Seward shame pole [was erected] to remind the Tongass people of this fact.”

Renewing Seward’s shame pole in 2017 is significant, as it is the same year that the State of Alaska celebrates the 150th anniversary of the U.S. purchase of Alaska from Russia in 1867—a purchase largely orchestrated by William Seward. A few months after Tlingits dedicated the Seward shame pole in Saxman, a private party in Juneau dedicated a new bronze monument to Seward in the front of the State Capitol building. The speeches at the Juneau dedication hailed Seward’s vision for establishing an American territory in the North Pacific, even as they acknowledged that Seward ignored the claims of Indigenous people to the lands he claimed to buy. But there was no mention of the Seward shame pole that had been erected a few months earlier in Saxman, a pole that protested Seward’s lack of recognition of Indigenous peoples at an early point in Alaska’s U.S. history.

The original version of the pole was erected at Tongass sometime in the 1880s, more than a decade after Seward had visited the Taant’a kwáan village, and after it was clear that he was not coming back to reciprocate the honors of the 1869 potlatch. The original pole depicted Seward at the top of a plain shaft; he wore a hat carved to look like a spruce root potlatch hat (perhaps a symbol of his attendance at the potlatch) and sat on a bentwood box (perhaps a pointed reference to the many gifts he had received as Ebbits’s guest of honor). According to most accounts, Seward’s face on the totem pole was painted white, and his ears and nostrils red as a mark of shame.

Sixty years later, long after Chief Ebbits had died and after most Taant’a kwáan Tlingits had moved to Ketchikan or Saxman, a second iteration of the Seward pole was erected in a new totem park at Saxman. Built by Tlingit men enrolled in the Civilian Conservation Corps (CCC), the Saxman totem park sought to attract tourists to see more than a dozen restored or replicated totem poles relocated from Tongass Island, Village Island, and Cape Fox. Ironically, the federal government included the Seward pole for replication in the Saxman park, although they did not realize that the pole shamed the Secretary of State until after they had paid the CCC carvers to replicate it!

In 2014, after nearly seventy years of standing at Saxman, the CCC version of the Seward pole began to fall apart. Because Seward’s debt had still not been resolved, however, the City of Saxman decided to commission a third version, choosing local Tlingit artist Stephen Jackson to create the new pole. Jackson, who is well known for his original take on Northwest Coast art, chose to create a new iteration of the Seward figure that combined caricature and realism. Noting the long tradition of caricature in Northwest Coast depictions of Euro-Americans (like the famous Haida argillite sculptures of white sailors), Jackson depicted Seward with bulging head and eyes, sitting atop a body that seems to lean forward slightly (perhaps in his eagerness to “get the goods”). But Jackson also portrayed the famous stabbing wounds and broken jaw that marked Seward after an attempted assassination in 1865 (the same night that Seward’s president, Abraham Lincoln, was killed in Ford’s Theater). Finally, Jackson painted Seward’s nostrils and ear creases red to acknowledge the continued shame of an offense that has still not been put to rest.

As several Tlingits in the Saxman community have stated, the shame pole has come to stand not so much for the specific 1869 potlatch that remains unpaid in terms of dollars or stacks of furs. Instead it is—and perhaps always was—more about Seward’s failure to recognize the status and sovereignty of Chief Ebbits and his Taant’a kwáan people, and of their claims to the land and waterways that Seward claimed to buy. Ebbits recognized Seward’s stature, and honored him with appropriate gifts, but Seward did not recognize Ebbits as his equal, and from this misrecognition stemmed an entire series of federal misrecognitions of Teikweidí clan sovereignty—and by extension, the sovereignty and claims of Alaska Native peoples. This is what makes the Seward pole so important to recognize during the Alaska Sesquicentennial. As Stephen Jackson said at the totem pole raising in April, ““It’s an honor to keep the complexity of this story alive.”

Emily Moore is Assistant Professor of Art History at Colorado State University, where she teaches Native American and American art history courses, among others. Her research focuses on contemporary and historic North American Native arts, as well as the inclusion (and exclusion) of Native arts in American and world art histories.

Viola Garfield and Linn A. Forrest, The Wolf and the Raven: Totem Poles of Southeastern Alaska. University of Washington Press 1961.