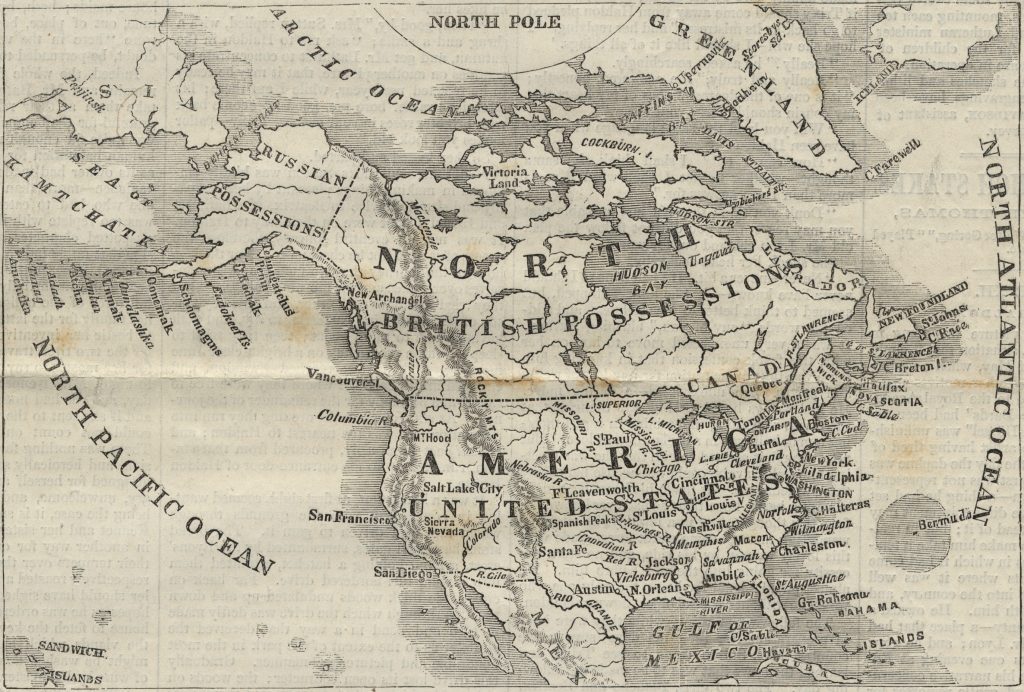 Sovereignty in North America at the time of the Alaska purchase. Harper’s Weekly, May 4, 1867.

Two years before the United States purchased Alaska from Russia, Dr. Henry P. Fisher, Surgeon-in-Chief of the Western Union Telegraph Expedition, staged an Independence Day celebration in the Russian American capital. At that time, New Archangel (or Sitka as it was also known) was the administrative hub of an extensive fur-trading and fur-hunting enterprise controlled by the Russian-American Company, a monopoly licensed by the czar. Dr. Fisher was in Sitka as part of an effort to establish a telegraph line from the United States to Europe via the Bering Strait and Siberia. The man in charge of this ambitious project was Colonel Charles S. Bulkley, a U.S. Army engineer and the former chief of the Signal Service. Bulkley, Fisher, and a small reconnaissance team arrived in Sitka on April 1, 1865 aboard the Revenue Cutter Shubrick and were warmly greeted by the Russian governor Prince Dmitrii P. Maksutov and his wife Maria. Two weeks later, when the Shubrick sailed again for San Francisco, Bulkley asked Fisher and a carpenter named Lawrence Conlin to stay behind. In a letter home, Fisher explained,

As you probably already know, I was left here with only a servant to remain till his [Bulkley’s] return and glean all information possible of the natives, traders and coasters, also to copy some charts of the northern coast which the governor has loaned us, and also to observe the horary [hourly] oscillations of the barometer . . . and make collections generally of interest to science.

Little is known about Dr. Fisher beyond that he was a Brooklynite and some years before joining the telegraph expedition he worked as a surgeon at New York Hospital. During his first weeks in Sitka he wrote about taking his meals in the governor’s mansion atop the promontory known today as Castle Hill and noted that Maksutov “expressed great interest in the work of uniting the two countries by telegraphic communication.” However, over time Fisher grew weary of the routine and of the foreign menu: 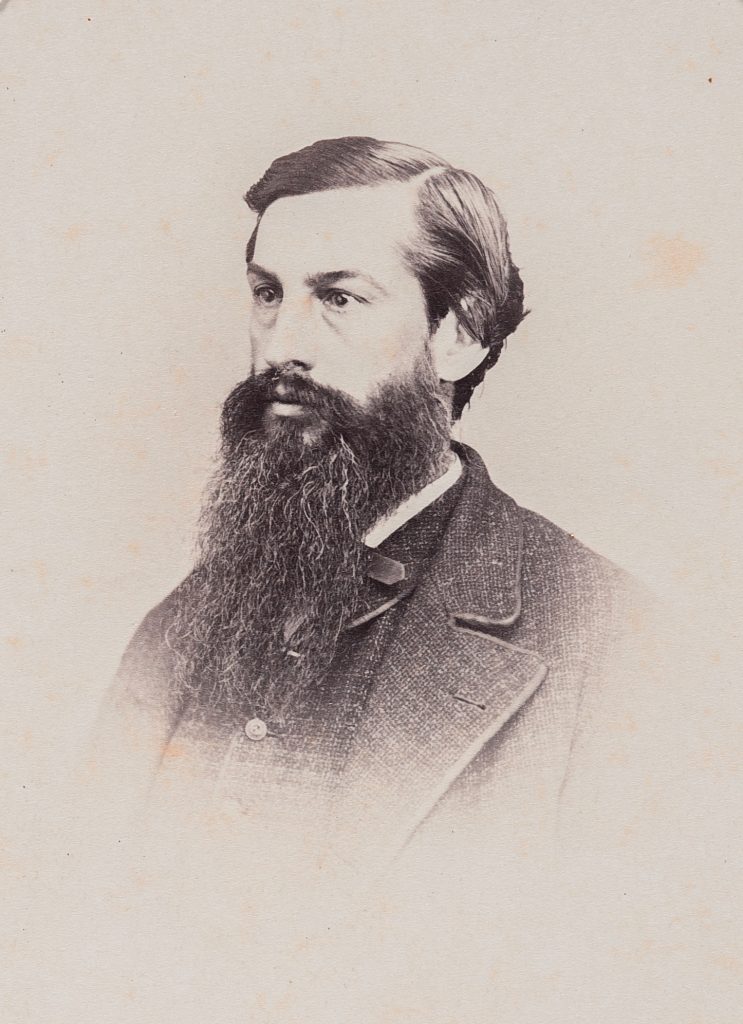 The Governor and his lady seem only too anxious for my comfort, and in fact it is somewhat of a bore for me to dine with them every day and be subjected to the infliction of the varied courses served after the Russian style, which with all my culinary knowledge I cannot classify or discover the component parts thereof.

Nor was Fisher taken with the local weather, which he described as “villainous” and alternating between sunshine, snow, rain, and wind in gales. Nevertheless, he greatly enjoyed speaking French with several of the Russian officers and taking part in the Russian Orthodox Easter festivities, which included visits to the homes of company officials in order of rank and the careful signing of guest books at each stop. “On the following day,” wrote Fisher,

the privacy of my quarters was disturbed by a visitation, without any previous warning, from the ladies of Governor, chief factor, post captain and some young misses that I did not remember.  I entertained them with cake and champagne and they seemed greatly delighted.  Thus closed the Easter holidays, and all again returned to work.

When July arrived, Fisher was clearly tiring of life in Alaska and described his assignment as “an exile on this out-of-the-way Island of Sitka.” He explained that another telegraph expedition vessel, the Clara Bell, had arrived with supplies and a small river steamer strapped to its deck that was intended for exploration of the Yukon River. The sailing ship Susanne, originally from Hamburg, Germany, had also anchored at Sitka with freight for the expedition. In an effort to entertain himself, Fisher proposed to the Clara Bell’s captain that they celebrate Independence Day in grand style. The United States and Russia were enjoying a long-standing alliance, so celebrating on those foreign shores did not seem out of the question. Prince Maksutov was by then visiting Kodiak and other company outposts and could not therefore give permission for the event, but Fisher decided to forge ahead. As he explained,

The anniversary of July Fourth was not permitted to pass by unnoticed here by Captain Sands, of the barque Clara Bell, and myself. The Governor, Prince Maksoutoff, being absent on his annual trip to the various ports of the Russo-American Company, we notified the Captain of the Port, Gaverishoff, and also Captain Lutz, of the Susanne, that we should fire the usual salutes, at sunrise, noon and sunset. Much to our gratification, all participated in the jubilee, and from the forts on shore, the Hamburg vessel in the bay and our own little barque, iron throats rung out their echoes, reverberating again and yet again from mountain to mountain—‘Vive l’America.’ Our country’s honored flag waved from topmast and citadel alike, while the Russian and German ensign floated as well in cordial companionship.

Around mid-day, the Americans invited the Russian-American Company officials and their wives and daughters for a light meal served upon the Clara Bell’s quarter-deck, and afterwards the group raised their glasses for toasts to the Russian emperor, Governor Maksutov, President Lincoln, and the success of the telegraph project. Fisher concluded, “Music and dancing enlivened the festivities, and all seemed heartily to appreciate the day we celebrated.”  However, the celebration was not over. During the day, the revelers received news that the governor’s wife had just given birth to a baby girl in the governor’s mansion. As Fisher explained, “a messenger heralded the addition to the house of Maksoutoff of a princess,” and straight away he suggested the child be named Clarabel after the telegraph expedition’s ship. He then queried the readers of the Daily Alta California, “What think you?  Was it not a good omen of the ‘entente cordiale’ in the matter of uniting a still closer bond of friendship, and, by the aid of the telegraph, the two greatest countries of the world? Nous verrons!  [We shall see!].”

In the end, the Maksutovs named their daughter Aleksandra (not Clarabel), and a year later the Western Union Telegraph Expedition was abruptly abandoned when a newly installed trans-Atlantic cable made the Alaska-to-Siberia telegraph plan superfluous. However, Fisher’s reports and those of other expedition members like William H. Dall and Henry W. Elliott helped to convince United States officials to pursue the purchase of Russia’s North American colony.  On March 30, 1867 the Treaty of Cession was signed in which Czar Alexander II agreed to sell Russian America to the United States for $7.2 million. The following year the Fourth of July was celebrated enthusiastically in Sitka—this time on sovereign United States soil—but it could not, if we are honest, be considered Alaska’s first Independence Day commemoration.

“Our Letter from the Russian Possessions,” Daily Alta California, August 27, 1865.

“The Russian-American Telegraph—Trip to British Columbia,” Rochester Daily Union, May 27, 1865.