The City of Seward: Home of Alaska Day 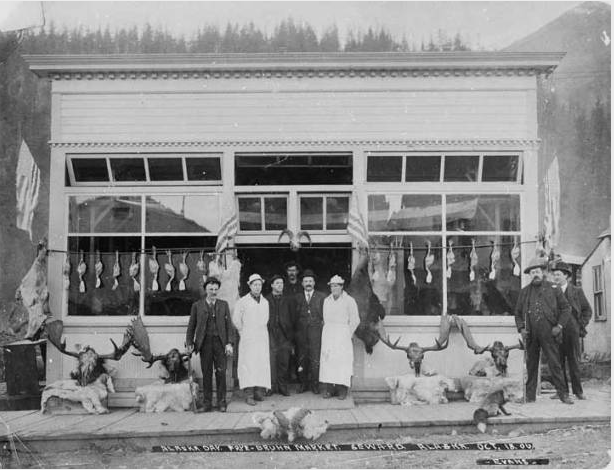 On a 1906 evening at Moore’s Hall in Seward –the idea for celebrating Alaska Day throughout the state emerged. Seward citizens awoke that morning to a cool, cloudy Fourth of July and to anvils banging and explosions caused by, the local newspaper reported, “those persons whose patriotism is of the turbulent description.” Wooden, frontier towns like Seward banned

public fireworks for fear of fire and local merchants agreed not to sell them — but the youngsters had still managed to get firecrackers. And with railroad tunneling occurring, other explosives were not impossible to obtain.

The cloud cover brought a brisk wind — but at least it wasn’t raining. Wood and coal stoves fired up and people ate breakfast. Most packed a bag or two for the railroad excursion while some looked forward to quiet day in town. Everyone anticipated an evening at Moore’s Hall for entertainment and speeches. In late afternoon, the train returned with most of the town. People were tired, and those organizing the evening knew it. “With rare and good judgment,” the Seward Gateway reported, “the committee in charge made the program short. It occupied little more than an hour and every feature commanded attentive interest, its variety preventing its becoming a drag even for a moment.” 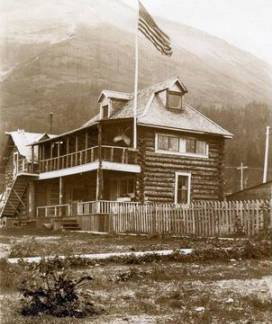 Moore’s Hall in Seward circa 1906 with Lowell Mountain the background, which later was named Mount Marathon. Photo courtesy of RBHS.

At some point in the middle of all this, Cecil H. Clegg spoke. He glorified the United States and made “glowing prediction of the future of the territory.” Knowing local politics, he advocated for Seward’s incorporation as a city, mostly because it would double school funding. Then he proposed something new – a recommendation that the formal anniversary of the transfer of Alaska from Russia to the United States at Sitka on October 18, 1867, be celebrated annually in the territory. Immediately after Clegg’s suggestion, the Rev. Louis H. Pederson, introduced a resolution that read: “Resolved: First – that it is the sense of this meeting that October 18, the day of the year when the formal transaction of Alaska was made by Russia to the United States, be a legal holiday in Alaska. Secondly – that the said holiday be observed by appropriate exercises wherever practicable.” The entire gathering adopted the resolution “unanimously and enthusiastically.”

July turned to August and then September arrived. Eyes focused on the mountains looking for termination dust and other signs of winter. Fairbanks, only a year older than Seward, caught on to the Alaska Day idea right away. On September 10, 1906, the Fairbanks Daily Times acknowledged Seward’s lobbying campaign and noted that “from all places a hearty approval was returned,” and that “All the places feel it particularly appropriate that the suggestion should come from Seward, the town named after William H. Seward, who was so large an instrument in the purchase of Alaska.”

The Rev. L.H. Pederson, , assumed chairmanship of the entire celebration. He organized the October evening wisely with songs, recitations and children’s flag drills to avoid potential boredom from the occasionally long-winded, jingoistic speakers. He made sure the latter would smoothly slip into slots between the more captivating entertainment — perhaps wondering how they could compete with the cute marching youngsters and humorous recitations. 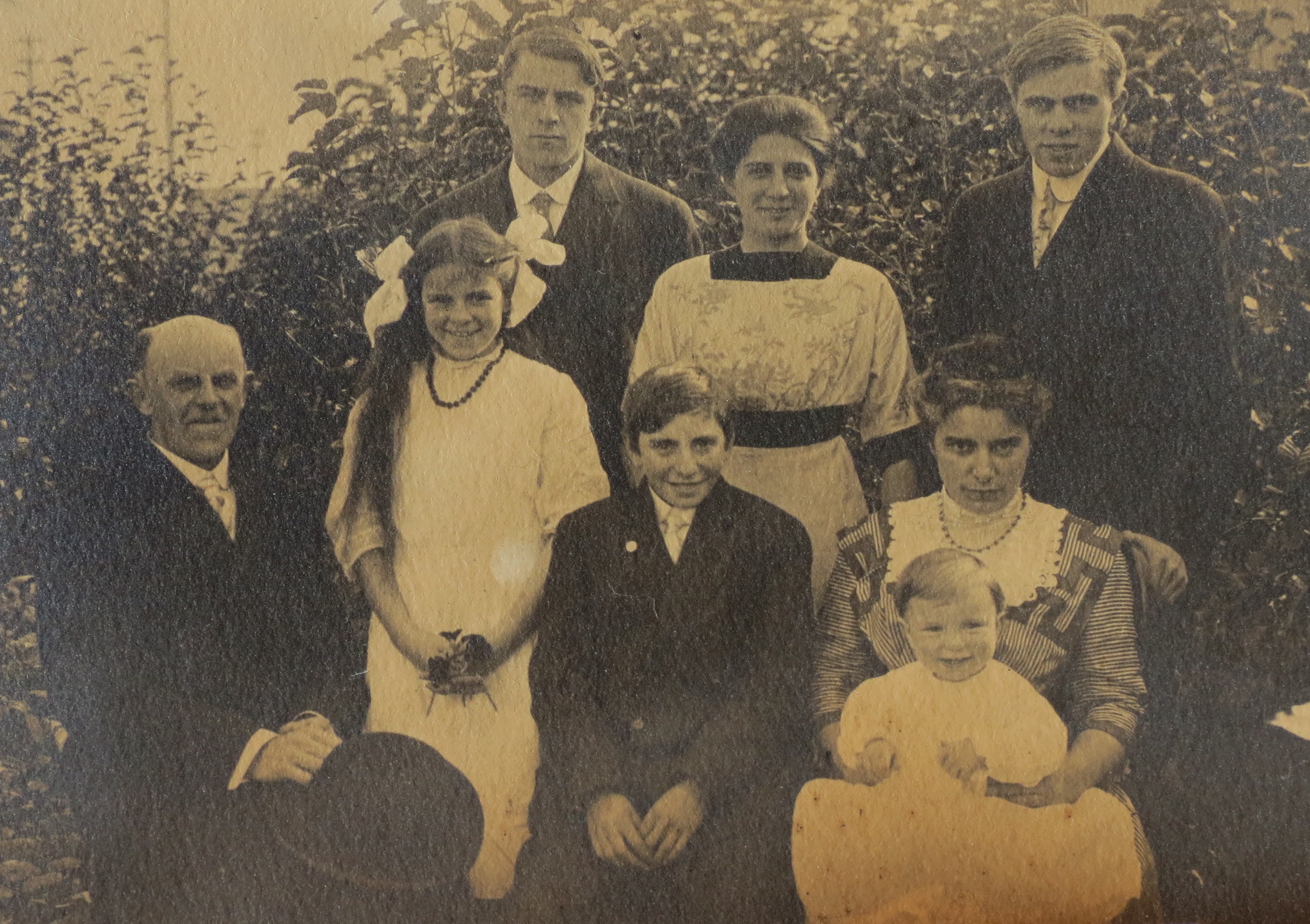 The Pedersen family in Seward. The Rev. Louis H. Pedersen is sitting a the far left. His wife, Francis is at far right.

The evening of October 18, 1906 at Moore’s Hall in Seward began with a singing of “The Star Spangled Banner” followed by trio of “In Old Madrid” and then John Greenleaf Whittier’s poem, “Barbara Frietchie,” set to music. The town’s children performed flag drills. After a piano solo and a reading of “Our Pilgrim Fathers,” the miners present especially enjoyed a parody of Hamlet’s “To be or not to be” speech called “The Prospector’s Soliloquy.” To remind everyone why they had all gathered that evening, Cecil Clegg read selections from the Treaty of Cession from Russia to the United States. Dr. C.H. Gibbons spoke of Alaska’s natural attractions and resources – and introduced a theme that would highlight future Alaska Day celebrations – the “neglect and tyranny” the territory suffered from the federal government. Judge L.S. Howlett, a newcomer and the evening’s main speaker, lightened things up. He spoke humorously about the fascination of Alaska life from a cheechako’s point of view, and promised to become a sourdough as rapidly as possible. Following all the music and speeches, the band struck up a tune, and townspeople danced into the early morning hours. 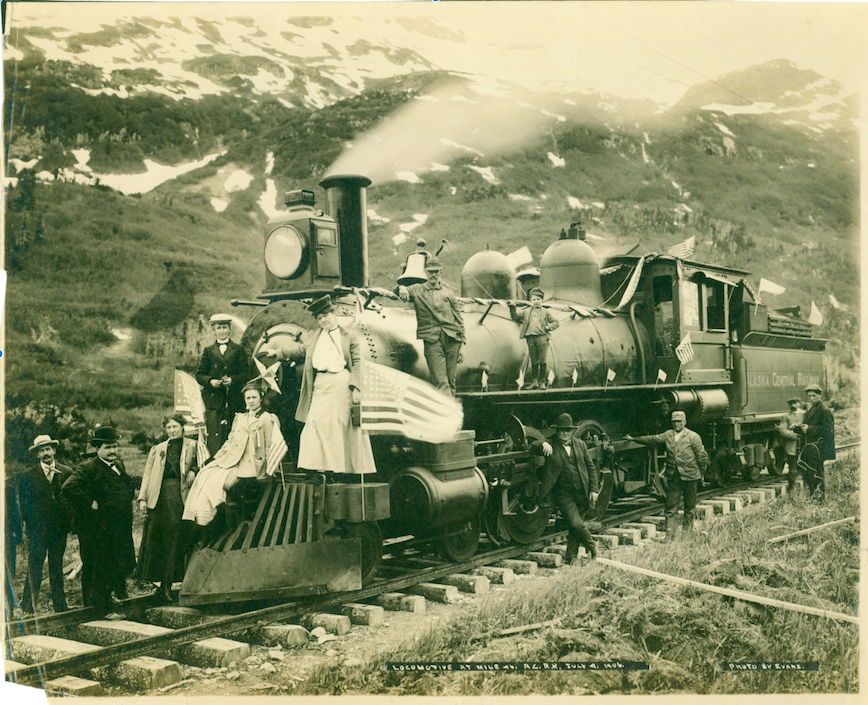 Seward citizens aboard an Alaska Central Railway engine on at about Mile 45 on July 4, 1906. Photo courtesy of the Resurrection Bay Historical Society (RBHS).

So went the 1906 Alaska Day celebration. Before the year ended, however, the Seward Gateway noticed an article in the Seattle Post-Intelligencer with an annoying error. That newspaper congratulated Ketchikan as having “inaugurated the plan of celebrating Alaska Day.” The Gateway corrected the error, noting that Ketchikan had, “with commendable good taste, carried out the suggestion” – but the idea had originated in Seward. In the years leading to Alaska’s gaining territorial status in 1912 and for many years after, Alaska Day became a platform to promote the territory and for lobbying against mistreatment by the federal government — a theme that sometimes carries over into today’s politics. Seward is the place where the idea for the event began.

This essay is an excerpt from a longer piece; the complete text can be found at The Spaces Between.

Doug Capra lives in Seward and is the author of The Spaces Between: Stories from the Kenai Mountains to the Kenai Fjords. His play about Nellie Neal Lawing (aka Alaska Nellie) ran for five summers in Seward. His play in progress about American artist Rockwell Kent in Alaska, And Now the World Again, has had several workshop productions. Capra has written forewords for two of Kent’s books about Alaska and is currently writing a book about the artist called That Infinite and Unfathomable Thing: Rockwell Kent’s Alaska Wilderness.